The effect of economic workplace stressors on health outcomes

This review was compiled from pre-existing contemporary research, government data and news reports in order to showcase the state of the public health within the U.S. workplace. Pre-existing studies utilized in this review have been featured previously in predominant medical journals and nationally circulated news publications. This review is based on studies and reports published on the evolution of the U.S. workplace and the role of stress in public health roughly over the past 50 years from about 1970 to current day.

There are many stressors in the workplace. Physical ailments are more associated with manual labor and repetitive motion. For example, truckers and those who drive long distance are at increased risk for lower back problems such as vertebral disc hernias and osteoarthritis due to the vibrations generated as the vehicle moves along the road. Jobs which require repetitive motion, such as factory assembly line work and typing increase the likelihood of repetitive motion injuries such as carpal/tarsal tunnel syndrome. Also, jobs which require workers to be in a seated position all day increase the likelihood of vascular coagulation and deep vein thrombosis (DVT).

Though physical ailments are mainly specific to manual labor, all jobs come along with emotional stressors such as:

Wages and hours worked are specific economic stressors that come along with all employment. The reason why wages are considered to be an economic stressor is relatively straightforward. If your wages are low, then you have less money. For the purposes of this discussion, workplace benefits such as retirement will be considered to be another form of wage as well. The current federal minimum wage is $7.25 per hour. That’s about $15,080 annually. However, workers whose state mandates a higher minimum wage must be paid at the state’s going rate (2).

Hours worked is also considered to be an economic stressor because you have less time to dedicate to your personal responsibilities as the number of hours you work increase. For example:

The current federal limit on hours worked per week is 40 hours. However, a growing number of workers exceed this number of hours due to the rise in contract work (such as Uber drivers), temporary positions and “off the books” positions (3).

Historically, prior to the 1970’s, there was a linear association between wages and people’s productivity in the workplace. However, after around 1973, a discrepancy arose between the two as shown in Figure 1. 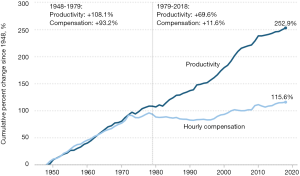 As showcased in the graph (Figure 1), productivity after 1973 continued to rise as it always did. However, wages began to stagnate. The area between the productivity and wage curves is known as the “productivity-pay gap” (4).

Historical sources of the productivity-pay gap

The productivity-pay gap is a source of contention among economists. The data is clear but what could be responsible?

If someone’s financial burdens exceed the amount of money he/she takes in through income, this creates economic stress. As a result, he/she has insufficient capital to participate in the economy. This leads to:

These issues are compounded by the rising amount of student loan debt caused by the ever-increasing cost of college and graduate education. As of the first quarter of 2019, national student loan debt had surpassed credit card debt amounting to nearly $1.49 trillion. That’s about $31,172 per person (15). This initial debt burden serves as an albatross around the neck of graduates and makes it even more likely for them to rely on credit/public assistance. It also makes it more likely for graduates to wind up as employees instead of creating their own businesses due to their debt burden.

The effect of economic stress on psychological health

The effect of economic stress on cardiovascular health

Understanding the effect of emotional stress on cardiovascular health is a little more nuanced and requires an understanding of the physiological mechanisms behind the body’s stress response. Stress promotes activity of the sympathetic arm of the autonomic nervous system. As part of the sympathetic response, hormones such as epinephrine, norepinephrine and cortisol are released which all serve the purpose of promoting a “fight-or-flight” response to maximize performance in the end-organs they effect. For example, in a sympathetic response, a person’s heart rate, blood pressure and cardiac output all go up to promote blood supply to vital organs. A person’s respiratory rate will go up to increase oxygen uptake into the blood. The body will mobilize nutrient stores, such as glucose and lipids, in order to keep sources of energy ready at hand, etc. However, a problem arises when a person is chronically stressed and stress hormone levels are chronically elevated.

On a macro level, problems can arise when a person’s blood pressure is chronically elevated. Chronic elevations in blood pressure impede the heart’s ability to pump blood. As a result, the heart muscle hypertrophies in order to compensate for the increased pressure that it’s pumping against. However, a hypertrophied heart doesn’t pump blood efficiently. This can result in heart failure and disruption of the normal electrical conduction in the heart, leading to arrhythmias. A specific type of myopathy, known as Takotsubo’s or stress-induced cardiomyopathy, is related to increased adrenergic signaling of the heart due to stress. Chronic elevations in blood pressure also increase the likelihood for aneurysm formation/rupture and stroke.

An increase in heart rate heightens the oxygen demand on the heart. As a result, it can result in heart tissue ischemia and infarct. Ischemia and infarct are more likely to occur if there is an underlying structural problem such as myopathy or carditis. A 1984 study by Deanfield et al. examined myocardial perfusion (via rubidium-32 uptake), ST segment changes and angina symptoms in response to a variety of stressors. The study observed psychological stressors were indeed as consistently evocative of myocardial perfusion changes as exercise. However, those exposed to the psychological stressor were less likely to self-report angina or experience ECG changes (16).

On a micro level, chronically elevated cortisol levels impede glucose transport into peripheral tissues. It achieves this through disruption of the transport of the insulin-dependent glucose transporter channel, Glut-4, to the cell membrane. In doing so, it induces a state of functional insulin resistance. Cortisol and epinephrine promote gluconeogenesis in the liver and lipolysis in peripheral fat tissue respectively. Cortisol also promotes lipogenesis resulting in increased biosynthesis of cholesterol and fatty acids. As a result, chronically elevated stress hormone levels are associated with elevated blood glucose, low-density lipoprotein (LDL) cholesterol and triglyceride levels.

D-dimer is a pro-coagulant factor associated with increased likelihood of embolization causing thromboembolic disorders. In 2004, Central Nigata, Japan was struck by 3 strong earthquakes and 90 subsequent aftershocks. This forced many residents to evacuate their homes and sleep in their cars. The chronic stress alongside immobilization from sleeping in their cars led to a dramatic increase in the incidence of pulmonary embolism (17).

The effect of economic stress on immune health

Stress has been shown to alter the body’s response to infectious disease. Immune cells all have receptors for a variety of cytokines as well as toll-like receptors. B lymphocytes contain membrane-bound cell surface immunoglobulins which bind antigen. T lymphocytes contain specific T cell receptors which bind antigen presented on major histocompatibility complex (MHC) by antigen presenting cells. Both are involved in adaptive immunity. The natural killer cells and the leukocytes of myeloid lineage, such as neutrophils and macrophages, are in turn responsible for innate immunity. Ongoing research purports there to be expression of adrenergic receptors on immune cells which help modulate immune response. However, this is yet to be fully elucidated.

The mechanism of how stress impairs immune health is not yet fully understood. One of the hypothetical models seeking to address this connection purports there to be a give-and-take relationship between T helper cell subtypes Th1 and Th2 immune responses. This Th1-to-Th2 shift is modulated by adrenergic alteration of the patterns of secreted inflammatory cytokines. The Th1 immune response is involved in combatting intracellular infection and neoplastic disease. The Th2 immune response is involved in combatting extracellular pathogens, such as bacteria and parasites, via activation of B cells and antibody production. Because of this, the chronic adrenergic stimulation of a Th1-to-Th2 shift may result in increased vulnerability to infectious, neoplastic, autoimmune and allergic disorders (18).

The effect of economic stress on thyroid function

Previous studies have linked increased cortisol to suppression of TSH release from the anterior pituitary gland by disrupting the hypothalamic-pituitary axis. A study by Samuels et al. sought to determine fasting TSH levels by using hydrocortisone infusion to mimic cortisol release during stress. By doing so, the study did indeed determine that thyroid-stimulating hormone (TSH) levels decreased with hydrocortisone infusion (19).

The two aforementioned effects of cortisol on the thyroid hormone axis can result in a functional hypothyroidism if cortisol levels remain chronically elevated.

The result of interventions to mitigate economic stress

Workplace intervention to address health outcomes have become common place in today’s world. For example, many workplaces have installed gyms in order to curb the incidence of obesity. Also, many workplaces stock healthy foods to promote healthy eating. But what happens when workplaces address economic stressors?

A 2019 study published in the Journal of Epidemiology & Community Health purported that a $1 increase in the minimum wage resulted in a 3.4–5.9% decrease in the suicide rate among adults age 18–64 with a high school education or less. In addition, this effect was pronounced in areas with higher unemployment levels (20). From the data derived by this study, it is fairly clear that economic security decreases stress and improves mental health outcomes. It is also reasonable to infer that economic security would similarly improve cardiovascular and immune health outcomes as well. However, formal systematic analysis would be needed to definitively determine this.

Despite these benefits, employers may be hesitant to address workplace economic stressors due to perceived notions that raising worker’s wages and cutting worker’s hours would result in decreased revenue. However, a 2019 case scenario proves this notion to be false. Microsoft’s Japan subsidiary experimented with a 4-day work week without cutting worker salaries. What resulted was a 40% boost in productivity (21). The reasoning behind this is fairly obvious. When workers aren’t tired or stressed out, they can dedicate more energy to their employment and optimize their performance. However, again, formal systematic analysis would be needed to definitely determine this.

Low wages and high number of hours worked in 2020 can largely be attributed to the economic and political influence of corporations in U.S. politics over, roughly, the past fifty years. Though extracting as much productivity as possible for little pay is beneficial for employers, it causes undue emotional stress in their workers. This results in adverse psychological, cardiovascular and immune health outcomes. The most obvious remedy to improving the welfare of American workers is to cut off the corporate money in U.S. politics. This corporate money has essentially turned the political realm into an open auction for influence peddling. Achieving this would require mobilization and advocacy among the U.S workforce. Advocacy for increasing the federal minimum wage to $15 per hour (the “living wage”) would also be a step in the right direction. Employers should strongly consider for their workforce a reasonable increase in pay and decrease in hours worked. Emotional stress caused by economic uncertainty and exhaustion from long hours decrease the productivity and enthusiasm of the workforce. Reasonable measures to address these stressors would go a long way to boost the workplace performance of workers and benefit public health outcomes.

Ethical Statement: The author is accountable for all aspects of the work in ensuring that questions related to the accuracy or integrity of any part of the work are appropriately investigated and resolved.