Current epidemiology of low back pain

Low back pain (LBP) is conventionally defined as pain, muscle tension or stiffness localized below the costal margin and above the inferior gluteal folds, with or without associated leg pain (1). LBP is conventionally classified as non-specific (i.e., up to 90% of cases, when the physiopathological source cannot be identified) or specific, the latter cases mostly due to hernias, fractures osteoporosis, rheumatic diseases, spondyloarthropathy, infections or cancer. Markers of possible root problems encompass irradiation to foot or toes, onset of numbness and/or paraesthesia, leg pain triggered by straight leg raising and localised neurology (e.g., circumscribed to a single nerve root). LBP can also be classified as acute (i.e., lasting <6 weeks), sub-acute (i.e., lasting between 6 weeks and 3 months) or chronic (i.e., lasting for more than 3 months) (1). Most episodes of LBP have favourable prognosis, especially when a specific cause can not be identified and the trigger cannot be directly related to severe systemic diseases such as cancer, rheumatic disorders and so forth (2).

It is generally assumed that LBP is a very common condition worldwide, occurring with a relatively high frequency in the general population, so that up to 80% individuals will experience an episode at some point throughout the lifetime (3). Information on LBP epidemiology has been published in some previous articles, but data have been mostly obtained with individual searches in scientific electronic databases such as PubMed, EMBASE and others, and may hence suffer from selection and publication bias (4-7). Even more importantly, no recent statistics has been published on the worldwide burden of LPB, at least during the last 3 years to the best of our knowledge (8). Therefore, the aim of this article is to provide a concise, updated overview on recent official data on worldwide epidemiology of LBP.

The epidemiologic information on back and neck pain was retrieved from the Global Health Data Exchange (GHDx) repository, which is a large worldwide database of health-related data maintained by the Institute for Health Metrics and Evaluation (9). This large catalogue contains information on approximately 350 human diseases, from 195 different countries and territories. The information is principally derived from survey and surveillance data, admission and outpatient records, health insurance claims and literature studies, for a total number of ~69,000 reliable sources (10).

The worldwide epidemiologic burden of LBP observed in the last 20 years, along with the current situation, are shown in Figure 1. The current incidence, prevalence and DALYs account for 245.9 million cases/year (15th worldwide cause; 32.4% cases associated with leg pain), 577.0 million cases (15th worldwide cause) and 64.9 million DALYs (6th worldwide cause), respectively. All these epidemiologic measures displayed a remarkable increase during the last 20 years, recording an increment between 49.8–50.7%, and displaying an almost linear trend (r=0.997 for incidence and prevalence, r=0.998 for DALYs; all P<0.001). The current relative values of incidence, prevalence and DALYs of LBP are hence 0.6%, 7.8% and 2.6% of all causes, respectively, whilst incidence and prevalence in the worldwide population are 3.2% and 7.6%, respectively. Among these, the relative burden of LBP in terms of DALYs has exhibited the sharpest increased during the last 20 years (1.5-fold, from 1.67% in 1992 to 2.60% in 2017). According to GDHx data, the burden of LBP is marginally higher in women than in men. More specifically, the incidence is 0.69% versus 0.59% [odds ratio (OR), 1.16; 95% confidence interval (95% CI), 1.07–1.26; P<0.001), the prevalence is 8.57% versus 7.09% (OR, 1.23; 95% CI, 1.21–1.25; P<0.001), whilst DALYs are 3.07% versus 2.19% (OR, 1.41; 95% CI, 1.34–1.49; P<0.001). The age distribution of incidence, prevalence and DALYs of LBP is shown in Figure 2. Cases of LBP exhibit a gradual increase from the birth age, reaching the peak between 40–50 years, and then progressively declining. Overall, ~50% of all LBP cases and DALYs are recorded between 35 and 64 years. The relative values of incidence, prevalence and DALYs of LBP among all human diseases and within each age range are shown in Figure 3. The incidence and prevalence display an almost linear relationship, paralleling age, and approximating 1.8% and 21% after the age of 80 years. Unlike prevalence, DALYs display a peculiar trend, beginning to increase after the age of 10 years, gradually increasing up to the age of 40–44 years and then progressively declining in the elderly. The burden of LBP stratified according to the socio-demographic index (SDI) is shown in Table 1. The risk of developing, and then being debilitated by LBD, increases in parallel with SDI, being over 3-fold higher in high than in low SDI countries (over 4-fold difference for DALYs). Finally, according to a linear fit based on data of the last 20 years it can be estimated that incidence, prevalence and DALYs of LBP will further increase between 1.44–1.45 folds by the year 2050. 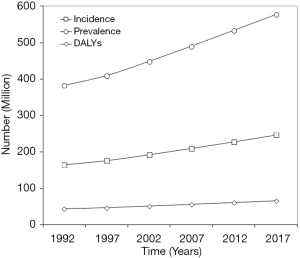 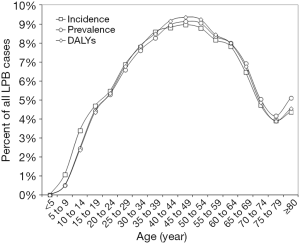 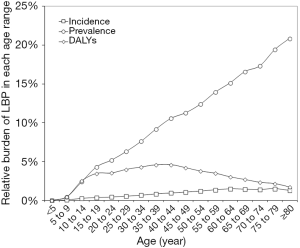 Burden of low back-pain stratified according to the SDI

The results of our analysis, based on the GHDx database, attest that the worldwide impact of LBP is relevant. Although the incidence remains relatively low (i.e., <1%), the values of prevalence (i.e., ~8%; 15th worldwide cause) and DALYs (i.e., 2.6%; 6th worldwide cause of DALYs) would contribute to classify LBP as a primary healthcare issue. Even more concerning are the projections based on the trend recorded during the last 20 years, whereby incidence, prevalence and DALYs would increase up to 353.5 million cases/year (0.70%), 833.8 million cases (8.3%) and 93.8 million (4.0%), respectively. The predictable trend of DALYs is especially alarming, since such an increase from the current relative burden of LBP (i.e., from 2.6% to 4.0%) implies that this condition will have an even more devastating impact on “healthy” life in the future. This evidence would require to make additional efforts on prevention and care of LBP, by increasing public funding on translational research focused on identifying potentially predictive and prognostic factors, including measurable biomarkers (11), by improving public awareness on the clinical, psychological, societal and economic consequence of living with LBP (12), and by developing new therapeutic interventions, either pharmacologic or physical, that would enable an earlier, stable and more efficient pain relief, especially in patients with chronic disease (13,14).

As regards the sex distribution, we confirm earlier reports that women tend to suffer more of LBP than men (7). We also showed that the impact of LBP on healthy life is substantially magnified in women, since the DALYs are over 40% higher in the female sex. The data on age distribution of LBP garnered from the GHDx also provide interesting evidence. According to previous reports, LPB has been for long considered the most common type of musculoskeletal pain in older adults (15). Our analysis only partially confirms this evidence. Although the percent of total number of LBP cases recorded in each age group is mostly concentrated between 35–64 years, the worldwide prevalence grows in parallel with ageing, up to ~21% after the age of 80 years. This would indeed confirm that LBP is very frequent in the elderly, but previous analyses may have probably overrated its burden in comparison to other disabling severe and/or disorders in older adults. In fact, our data shows that the relative incidence (9th worldwide cause), prevalence (14th worldwide cause) and DALYs (12th worldwide cause) of this condition are not exceptionally different after the age of 80 years from those in the entire age range, and in no case LBP would be comprised between the 5 most frequent or debilitating diseases in the elderly.

The last important information than can be garnered from our analysis is that a direct relationship exists between the burden of LBP and SDI. We found that there is still an enormous gap, comprised between 3–4 folds, between incidence, prevalence and DALYs of LBP in high and low SDI countries. This aspect seems rather controversial in the current scientific literature. An earlier critical review of the scientific literature published in 2011 identified 17 studies which investigated the burden of LPB across different socio-economic positions, concluding that no clear relationship exists between LBP and socio-demographic characteristics (16). Later on, Chou et al. surveyed 24,435 Taiwanese adults, 26% of whom reporting at least one episode of LPB within the past 3 months, and found that low education was a significant predisposing factor for this condition (OR, 1.38; 95% CI, 1.23–1.55) (17). Finally, Stewart Williams et al. analyzed the data of the World Health Organization (WHO) Study on global AGEing and adult health (SAGE), totaling 30,146 subjects in China, Ghana, India, Mexico, South Africa and the Russian Federation, and concluded that lower education was a significant predictor of past-month LBP (18). This evidence recently led Hartvigsen and colleagues to conclude that disabling LBP may be over-represented in countries with low socioeconomic status (8). Although we cannot actually find a reliable explanation for the discrepancy with our findings, we hypothesize that limited access to care and higher burden of more severe conditions (e.g., infections) in lower SDI countries (i.e., low and low-middle SDI) may perhaps contribute to a significant underdiagnosis of LBP.

In conclusion, the results of our analysis attest that LBP poses a significant worldwide epidemiologic burden, especially in women, adults and high SDI countries, displaying an escalating trend that is not expected to reverse soon.

Conflicts of Interest: All authors have completed the ICMJE uniform disclosure form (available at http://dx.doi.org/10.21037/jhmhp-20-17). The authors have no conflicts of interest to declare.

Ethical Statement: The authors are accountable for all aspects of the work in ensuring that questions related to the accuracy or integrity of any part of the work are appropriately investigated and resolved. The study was performed in accordance with the Declaration of Helsinki, under the terms of relevant local legislation. The data in this article were taken from a public database, so ethical review is exempt.