In 2017, Medicare implemented the Quality Payment Program (QPP) as a key strategy for shifting the US health care system away from fee-for-service reimbursement toward value-based payment (1). Most physicians who currently care for Medicare beneficiaries nationwide are required to participate in the QPP via one of two tracks.

In the first track, the Merit-based Incentive Payment System (MIPS), physicians are evaluated annually based on activities in the four domains of Quality, Improvement Activities, Cost, and Promoting Interoperability. Performance in each domain is weighted and the resulting scores are combined across domains to determine upward or downward adjustments to physicians’ overall professional payments. These adjustments can be significant, ranging from ±5% in 2020 to ±9% in 2022 and beyond.

The alternative to MIPS is the Alternative Payment Model (APM) track, in which physicians participate in the QPP by enrolling in at least one value-based APM that is “advanced” by virtue of involving the potential for financial loss (e.g., payment decreases or shared losses), not just financial gain (e.g., bonus payments, shared savings). Physicians can qualify for the APM track by electing to participate in a number of eligible arrangements, with the most prominent nationwide examples including accountable care organizations (ACOs) as a population-based payment model, bundled payment as an episode-based payment model, and emerging risk-adjusted capitation arrangements such as direct contracting models) (2-4).

The success of the QPP may rest on how physicians view and engage with its two participation tracks. In particular, physicians’ willingness to engage in MIPS likely depends in part on which stakeholders – patients, providers, or others—they believe benefit from the program. Moreover, physician willingness to accept advanced APM incentives over fee-for-service incentives is likely a key determinant of engagement and participation in advanced APMs. Because MIPS is intended to serve as a transitional path toward advanced APMs, it is critical to understand perspectives about both the benefits of MIPS as well as advanced APM incentives.

Despite the importance of these issues—if and how physicians believe MIPS benefits different stakeholders; whether physicians would accept APM incentives—little is known about them.

Between March and May of 2017, we conducted a web-based survey using a national sample of 1,431 practicing internal medicine physicians maintained by the American College of Physicians (ACP) (5), the methods and design of which have been previously described in detail elsewhere (6). As part of that survey, respondents were asked how MIPS would ultimately impact (Benefit, Harm, Neither, Not Sure) the following stakeholder groups: Medicare patients, physicians caring for Medicare patients, hospital/clinics accepting Medicare patients, Medicare itself, and society.

Impact of MIPS on stakeholders

Figure 1 Physician perspectives about the impact of MIPS on stakeholders Groups. This figure shows responses from 726 physicians to the following question: “In your opinion, will such a Medicare merit-based payment system ultimately benefit or harm each of the following?”. Answer options included Benefit, Harm, Neither Benefit Nor Harm, and Not sure. MIPS, Merit-based Incentive Payment System.

Overall, the minority of respondents reported willingness to accept incentives related to major advanced APMs (Figure 2). In particular, less than a third reported willingness to accept risk-adjusted capitation (28%), shared savings/loss (23%), or bundled payment (23%) arrangements even in exchange for a guaranteed 5% increase in reimbursement from their largest payer. Approximately a third of respondents reported not being willing to accept these incentives: 38% for shared savings/loss, 36% for bundled payment, and 29% for risk-adjusted capitation arrangements. A quarter of respondents were unsure (22–25%), and fewer were unfamiliar with these arrangements (16–20%). 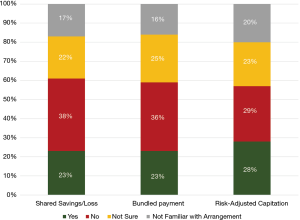 Figure 2 Willingness to accept APM incentives. This figure shows responses from 726 physicians to the following question: “If your largest payer guaranteed a 5% increase in reimbursement in return, would you accept each of the following payment arrangements?”. Answer options included Yes, Not, Not Sure, and Not Familiar with Arrangement. APM, alternative payment model.

In a survey evaluating physician perspectives about a large national value-based payment program in the US, we provide insight into how practicing physicians believe MIPS will impact various stakeholder groups, as well as physician willingness to accept advanced APM incentives. Our findings pose several policy implications.

First, our results underscore the concerns that physicians and other health care stakeholders possess about MIPS. Though existing evidence suggests that practicing physicians and medical trainees tend to have positive perspectives about the program in general (6,7), a notable proportion also possess concerns about the ability for MIPS to improve value and the risk of creating unintended consequences. Other stakeholders such as MedPAC have criticized the program, advocating Medicare to end the program and use a voluntary alternative its place (8). The fact that few physicians in our sample believed MIPS would benefit stakeholder groups reinforces the opportunity for policymakers to continue improving MIPS through stakeholder engagement and dialogue—an explicit focus adopted by Medicare in MIPS policy (1).

Second, our results spotlight additional work needed in order to increase physician willingness to engage in advanced APMs. Despite increased APM participation being a key goal of QPP, only a minority of physicians in our study reported being willing to accept incentives related to ACOs, bundled payments and risk-adjusted capitation, in exchange for a guaranteed 5% payment increase. This hesitation may relate in part to a lack of familiarity with these payment models—16-20% of respondents reported being unfamiliar with the arrangements—and in part to concerns about the payment arrangements themselves (e.g., uncertainty about the ability to perform well in APMs; concerns about compliance and reporting burden associated with participation). Regardless, future work should explore provider perspectives about APMs in order to understand factors driving willingness to participation.

Our study has limitations. First, the generalizability of our findings is limited by response rate, though our findings remain relevant as what is to our knowledge the first description of physician perspectives of these two key aspects of the QPP. Second, while we did not evaluate physician perspectives on a comprehensive list of advanced APMs, we focused on what the three most prominent arrangements nationwide as defined by current and emerging Medicare policy. Third, we assessed overall perspectives about how MIPS would benefit or harm stakeholder groups, but not specific drivers of benefit or harm. This remains an important area for future work. Fourth, though our study evaluated early physician perspectives in the first year of the QPP, the program has been stable over several years with few changes to MIPS and major advanced APMs.

Nonetheless, our study supports ongoing payment policy by shedding light on how physicians view MIPS and advanced APM incentives—key factors that will dictate the success of the nationwide QPP. Our findings offer insight to policymakers seeking to using the QPP to drive greater value in the US health care system.

The authors would like to acknowledge Arlene Weissman, PhD, for assistance with data collection.

Ethical Statement: The authors are accountable for all aspects of the work in ensuring that questions related to the accuracy or integrity of any part of the work are appropriately investigated and resolved. The protocol (#826825) was reviewed and deemed to be exempt by the University of Pennsylvania Institutional Review Board.