According to the 2019 American College of Cardiology (ACC)/American Heart Association (AHA) guideline on the primary prevention of cardiovascular disease, cigarette smoking of any amount, elevated blood pressure, elevated serum low-density lipoprotein cholesterol (LDL-C), diabetes mellitus and obesity shall be considered major and independent risk factors for ischemic heart disease (IHD) along with low serum high-density lipoprotein cholesterol (HDL-C) and advanced age (1). Considering that any of these risk factors provides a major and independent contribution to development of IHD when left untreated over many years, most algorithms for absolute cardiovascular risk assessment now incorporate these variables for planning lifestyle improvements, nutritional changes and even medical treatments aimed at reducing the risk of developing acute ischemic events (2). Physical inactivity is another important factor, which has recently emerged as a major risk factor for cardiovascular disease as well as for many other human diseases such as cancer, diabetes, and osteoporosis (3). The strong accumulating evidence on the impact of physical inactivity on the risk of developing cardiovascular diseases has then recently persuaded many distinguished scientific associations to include physical inactivity among the major cardiovascular risk factor that shall be actively targeted for preventing unfavorable cardiovascular events (4,5).

Altogether, these six parameters (i.e., hypertension, LDL hypercholesterolemia, diabetes, obesity, cigarette smoking and physical inactivity) have also been identified as the primary and most important modifiable cardiovascular risk factors by the 2016 European Guidelines on cardiovascular disease prevention in clinical practice, and shall hence be the cornerstone of cardiovascular risk estimation and prevention (6).

In an era increasingly relying on personalized (laboratory medicine), assessing the epidemiologic burden of well-established risk factors of human disease is an essential preamble for establishing reliable healthcare interventions aimed at identifying more vulnerable populations in whom screening and diagnostic interventions may have the greatest chance of success (7). Cardiovascular disease in general, and IHD in particular, make no exception to this rule, as recently highlighted by the Sixth Joint Task Force on cardiovascular disease prevention in clinical practice, whereby combined strategies for ameliorating cardiovascular health in the general population is the most cost-effective approach for reducing the clinical, societal and economic burden of IHD around the world (6). Therefore, this article aims to provide updated worldwide population statistics on the six major and independent cardiovascular risk factors, which may then be used for establishing targeted healthcare policies focused at reducing the burden of the single risk factors in the most vulnerable populations.

An electronic search was performed in Global Health Data Exchange (GHDx) registry, a large database of health-related data maintained by the Institute for Health Metrics and Evaluation (8), using the keywords “high body-mass index” AND “high fasting plasma glucose” AND “high LDL cholesterol” AND “high systolic blood pressure” AND “low physical activity” AND “smoking” in the field “Risk” combined with “ischemic heart disease” in the field “causes” and “deaths” in the field measure. The database contains data on >350 human diseases, from 195 countries and territories. The source of information is represented by survey and surveillance data, admission and outpatient records, health insurance claims and literature studies, totaling nearly 69,000 reliable sources. The definitions of these search parameters in the GHDx registry are shown in Table 1 (9). This basic search was then combined with additional demographic factors such as “years”, “sex”, “age” and “location”. The epidemiologic burden of each of these six major cardiovascular risk factors was then expressed as number of attributable deaths for IHD, both in absolute and percent values. The year 2017 is the last searchable in GHDx registry, and was hence used for reporting recent information on population statistics for the six cardiovascular risk factors.

Definitions of the search parameters in the GHDx registry

The output of the different electronic searches was downloaded in comma-separated values (CSV), imported into an Excel file (Microsoft, Redmond, WA, US) and analyzed with MedCalc statistical software (MedCalc Software, Ostend, Belgium). The risk on IHD mortality was finally reported as odds ratio (OR) and 95% confidence interval (CI). The study was performed in accordance with the Declaration of Helsinki. Ethics board approval is unnecessary at the local institution (University Hospital of Verona) for articles based on free scientific databases searches.

The epidemiologic trend reflecting the impact of the six leading cardiovascular risk factors on mortality for IHD in both absolute and relative (%) values is shown in Figure 1. Notably, the absolute number of IHD deaths attributable to each of these six risk factors has consistently increased between the years 1990 and 2017. Among these factors, mortality for high body mass index (BMI) has exhibited the sharpest increase (+1.84-fold), followed by high fasting plasma glucose (+1.74-fold), high systolic blood pressure and low physical activity (both +1.48-fold) and high LDL cholesterol (+1.41-fold). The increase of IHD mortality related to smoking seems instead marginal (+1.09-fold). In relative terms, high systolic blood pressure is still responsible for the largest number of deaths for IHD (32.4%), followed by high LDL cholesterol (25.1%), high fasting plasma glucose (15.0%), high BMI (10.8%), smoking (10.7%) and low physical activity (5.9%). Nevertheless, although the percent value on total IHD mortality of high BMI and high fasting plasma glucose has increased between the years 1990 and 2017 by 1.25-fold and 1.20-fold, respectively, that of the other four risk factors has instead contextually decreased (smoking, −26%; high LDL cholesterol, −4%) or has remained virtually unchanged (high systolic blood pressure, 0%; low physical activity, +1%). 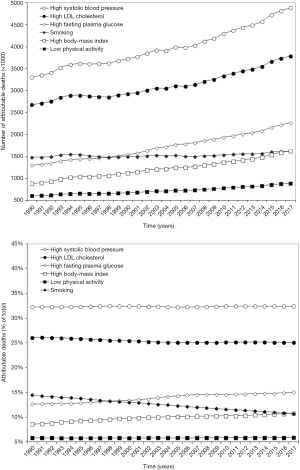 The age- and sex-related impact of the six lading cardiovascular risk factors are shown in Table 2 and Figure 2. In most circumstances, the impact of cardiovascular risk factors on mortality for IHD is similar between genders except for smoking, which displays a considerably larger impact in the male sex, and low physical inactivity, which instead exhibits a borderline significantly larger impact in the female sex (Table 2). The age distribution of the impact of all cardiovascular risk factors on IDH mortality shows a rather similar pattern, with the curve in the male sex anticipating that in the female sex and the largest impact on IHD occurring after 50 years of age. Some peculiar trends can then be seen for each of these trends, as summarized in Figure 2. Interestingly, the curves of high LDL cholesterol display a biphasic pattern in both sexes, with a second peak (higher in women than in men) delayed by approximately 20 years from the former. Interestingly, high BMI and smoking in both genders, together with high LDL cholesterol in men, seem to play a larger effect on IHD mortality between 50–75 years, whilst the effect of the other four risk factors seems more prevalent in the elderly (i.e., in people aged 70 years or older). 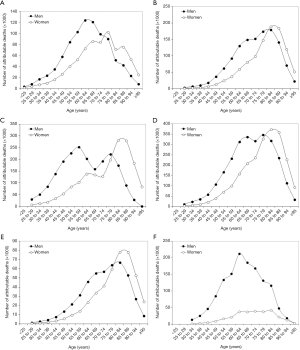 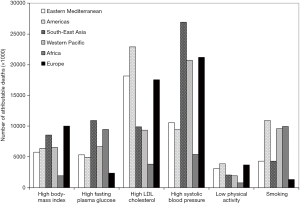 Irrespective of the fact that the current guidelines variably endorse an opportunistic or systematic screening, the inclusion of most of all the six major independent modifiable cardiovascular risk factors (i.e., hypertension, LDL hypercholesterolemia, diabetes, obesity, smoking and physical inactivity) is indeed the lowest common denominator of all algorithms. In a world with limited funds, still recovering from an unprecedented worldwide economic crisis, the rational use of human and economic resources appears of utmost importance. Screening policies shall be deeply guided by population epidemiology, whereby diagnostic tests need to be prioritized in people at higher risk of developing human diseases, thus including those at higher risk of IHD.

The updated results of our analysis first show that the impact of hypertension and LDL hypercholesterolemia on IHD mortality remain by far the largest, altogether these two factors accounting for nearly 60% of all deaths for IHD. Nevertheless, the analysis of the recent trend also shows that obesity and diabetes are gaining large momentum, whereby its impact on IDH mortality has displayed the largest absolute and relative increase (≥20%). Unlike these parameters, the temporal impact of the other risk factors has not increased, with smoking displaying instead the largest overall decrease (−26%). This is not surprising since recent evidence confirms that both obesity and diabetes are now undergoing a worldwide epidemic (10,11). However, legislative smoking bans and efficient policies of smoking dissuasion in many countries have contributed to mitigating the adverse health impacts of smoking (12). Yet our data shows that indoor or outdoor smoking bans would need to be reinforced in some parts of the world, especially in Americas, Africa and Western Pacific, where the smoking-related IHD deaths seem still consistently higher than in other continents. As regards obesity, its burden on IHD mortality seems fairly homogenous around the world, with the obvious exception of African countries where this condition and its association with co-morbidities are on the rise, but still much understandably lower than in other continents (13).

Interesting evidence has also emerged from the geographic analysis of hypertension, LDL hypercholesterolemia, and obesity. The observation that the burden of high systolic blood pressure on IDH deaths is particularly high in South East Asia, Europe and Western Pacific only partially overlapping with other data recently reported (14), which concluded that the prevalence of this condition is increasing in East Asia and Pacific, Latin America and South Asia, for both men and women, and in Europe and Central Asia for men. Regarding the impact of LDL hypercholesterolemia on IHD mortality, to the best of our knowledge, no worldwide epidemiology data have been recently published, with limited analyses available in single countries (15). Nevertheless, it is not surprising that a larger effect of both this factor and obesity can be observed in America, Europe, and Eastern Mediterranean since unhealthy dietary habits are particularly frequent in these geographies (16). Physical inactivity deserves additional considerations. Its relative impact remains the lowest on IHD deaths (Figures 1,3), globally accounting for as much as ~6% of mortality, its burden seems especially accentuated in Europe, and Americas. These figures exactly mirror previous data (17) and pave the way for establishing specific healthcare interventions aimed at promoting more active lifestyles in these locations.

The age- and sex-related distribution of IHD mortality deserves some additional notes. We surprisingly found that the burden of hyperglycemia, LDL hypercholesterolemia, hypertension, and obesity is virtually indistinguishable between men and women, whilst smoking was a much larger cause of mortality for IDH in the male sex and the impact of physical inactivity was borderline more prevalent in the female sex. This would lead us to conclude that, except for smoking, both genders would need to be targeted with specific screening programs aimed at early diagnosing these conditions. The age-related distribution, shown in Figure 2, does not add much to the current knowledge on the natural history of IHD, with effects of the various risk factors accumulating after many years (1). Nonetheless, our data seems to demonstrate that the impact of obesity and smoking on IDH mortality in both sexes, and hypercholesterolemia in men, is somehow anticipated compared to the other risk factors, suggesting that earlier reinforced educative interventions shall be planned for these risk factors.

The results of our analysis attest that although the absolute number of IHD deaths attributable to the major modifiable cardiovascular risk factors has increased during the last three decades, the single trends were not overlapping, with obesity and diabetes displaying the largest increase and smoking exhibiting the largest decrease. Targeted healthcare interventions shall hence be scaled up around this evolving epidemiology.

Conflicts of Interest: All authors have completed the ICMJE uniform disclosure form (available at http://dx.doi.org/10.21037/jhmhp.2019.12.03). The authors have no conflicts of interest to declare.

Ethical Statement: The authors are accountable for all aspects of the work in ensuring that questions related to the accuracy or integrity of any part of the work are appropriately investigated and resolved. The study was performed in accordance with the Declaration of Helsinki (as revised in 2013). Ethics board approval is unnecessary at the local institution (University Hospital of Verona) for articles based on free scientific databases searches.