There are over 9.6 million seniors and adults with disabilities in the U.S. who are dually eligible for Medicare and Medicaid (1). About 20% of Medicare beneficiaries are dually eligible for Medicare and Medicaid, and about 15% of Medicaid enrollees are dually enrolled. They qualify for Medicaid because of their low incomes, disability status, and limited financial assets (2). Roughly two-thirds of dual eligibles are elderly people who meet the age requirement for Medicare, and the remaining third qualify for Medicare through the Social Security Disability Insurance Program. Persons who are dually enrolled in Medicaid and Medicare include many vulnerable patients who are more likely to be African American or Hispanic, low income, and to have multiple chronic conditions (e.g., depression, Alzheimer’s, heart failure, diabetes, chronic obstructive pulmonary disease), complex care needs, and high levels of health care utilization (1). Elderly African Americans and Hispanics are six times more likely than elderly whites to be dual eligibles (Wright et al. 2015). Dual eligibles are of particular concern to health care providers and policy makers because they have substantial health care needs that are often unmet and increased morbidity and mortality (3). Because of low incomes and lack of private health insurance, this is a population that is vulnerable to problems with access to care and loss of Medicaid coverage (4). About 5.4% of dual enrollees become disenrolled in Medicaid each year (5).

There has been increasing interest in examining cancer outcomes among persons who are dually enrolled in Medicare and Medicaid. Several studies have identified disparities in the quality of cancer treatment according to race, ethnicity, socioeconomic status, and source of health insurance (10-13). Medical costs for patients with cancer have increased over the past decade, partly because of the development of expensive chemotherapy drugs (14). Spending on cancer care in the U.S. is expected to rise from $125 billion in 2010 to $207 billion by 2020 (15).

The goal of the current article was to review the literature on dual enrollment in Medicare and Medicaid and cancer outcomes among 4 most common types of cancer (i.e., breast, prostate, lung, colorectal cancer) (16). Of particular interest was whether dual enrollment improves or worsens outcomes, such as survival and the quality of cancer care.

This review is based upon PubMed bibliographic searches and appropriate search terms. Articles published in English from 1997 through May 2018 were identified using Boolean algebra commands and MeSH search terms: dual use AND (Medicare OR Medicaid) AND cancer. The searches were not limited to words appearing in the title of an article. The references of review articles were also reviewed (17). Information obtained from the bibliographic searches (information presented in abstract, key words, and study design) was used to determine whether to retain each identified article. Studies with a cohort or cross-sectional study design were included.

A total of 65 articles were identified and screened using either their full texts or abstracts. A total of 13 studies met the eligibility criteria for inclusion in this review.

The 13 studies included one cross-sectional study and 12 cohort studies (Table 1). Bradley et al. (18) studied a cohort of 2,626 older patients with local and regional stage, non-small cell lung cancer (NSCLC). Dually eligible patients were half as likely to undergo resection as Medicare-only patients (P<0.001) and were more likely to receive radiation than Medicare only patients. Surgically treated dually eligible patients had slightly poorer survival as compared with that of Medicare only patients. 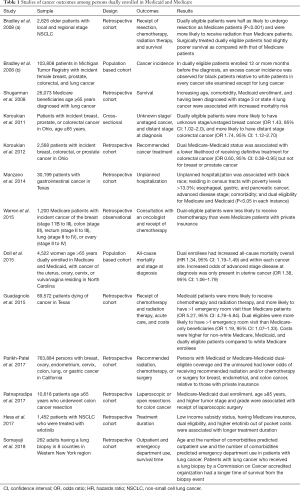 In a population-based cohort study of 103,808 patients with incident breast, prostate, colorectal, and lung cancer, Bradley et al. (19) observed an excess cancer incidence for dually enrolled black patients relative to their white counterparts in every cancer site examined, except for lung cancer. The dually eligible patients were enrolled 12 or more months before the diagnosis.

Shugarman et al. (20) conducted a retrospective cohort study of 26,073 Medicare beneficiaries ≥65 years of age who were diagnosed with lung cancer. Increasing age, and comorbidity, Medicaid enrollment, and having been diagnosed with stage 3 or stage 4 lung cancer were associated with increased mortality risk.

In a retrospective cohort study of 2,568 patients with incident breast, colorectal, or prostate cancer, Koroukian et al. (22) found that, compared to Medicare only, dual Medicare-Medicaid status was associated with a lower likelihood of receiving definitive treatment for colorectal cancer (OR 0.60, 95% CI: 0.38–0.95) but not for breast or prostate cancer.

Doll et al. (24) conducted a population-based cohort study of 4,522 women age >65 years dually enrolled in Medicare and Medicaid, with cancer of the uterus, ovary, cervix, or vulva/vagina. Compared to Medicare only, dual enrollees had increased all-cause mortality overall (HR 1.34, 95% CI: 1.19–1.49) and within each cancer site. Increased odds of advanced stage disease at diagnosis were only present in uterine cancer (OR 1.38, 95% CI: 1.06–1.79).

On the other hand, in a retrospective cohort study of 763,884 persons with cancer of the breast, ovary, endometrium, cervix, colon, lung, or stomach, Parikh-Patel (15) found that persons with Medicaid or Medicare-Medicaid dual-eligible coverage and the uninsured had lower odds of receiving recommended radiation and/or chemotherapy or surgery for breast, endometrial, and colon cancer, relative to those with private insurance.

In a retrospective cohort study of 1,452 patients with NSCLC who were treated with erlotinib, Hess et al. (27) found that low income subsidy status, having Medicare insurance, dual eligibility (compared to Medicare only), and higher erlotinib out of pocket costs were associated with longer treatment duration.

The association between dual insurance status and survival may be through a couple mechanisms. According to evidence collected from this review, dual enrollees were more likely to be diagnosed at later stage of cancer, leading to lower survival. Patients with incident breast cancer have been reported to be less likely to be staged (21), which can adversely affect receipt of appropriate cancer therapy. Second, lower survival may result from disparity in access to high quality of care (e.g., inadequacy of staging, delays in initial treatment, inconsistency with treatment guidelines, etc.). It was reported that the program structure of Medicaid contributed to access barriers to high quality of cancer care, leading to worse prognosis and health outcomes (29). On the other hand, the finding that patients with dual coverage have a poorer survival rate than patients with single insurance coverage must be interpreted with caution. Studies rarely provide information on whether patients were diagnosed and treated with cancer before dual enrollment or vice versa. Ward et al. (Ward, 2008) found that patients with serious medical conditions such as cancer were more likely to have Medicaid and became dual insured, indicating dual enrollees had more complex medical issues and poorer overall health conditions than single insured. Therefore, their lower survival rate could be a result of poor health instead of insurance status.

Outcomes and cancer site(s) varied among the studies. Caution is therefore required in comparing results across studies. Potential sources of bias include under detection of cancer outcomes and procedures due to the sole use of administrative data in some studies. Thus, the jury is still out regarding the issue of whether dual enrollees have poorer or better cancer outcomes than those beneficiaries who have either Medicare or Medicaid but not both, and also regarding the issue of whether dual enrollees receive less aggressive cancer treatment than those Medicare or Medicaid beneficiaries. One might expect that some dual enrollees (e.g., those with Alzheimer’s or other life-threatening. terminal disease) would have poorer cancer outcomes and would be treated less aggressively even though they have dual insurance coverage. In addition, Medicaid beneficiaries, being poor and having less access to care, might present with later stage cancers for which treatments are less effective.

Additional studies are needed to determine the replicability of findings reported to date. Of particular interest are studies of major forms of cancer (breast, prostate, lung, colorectal) that include adequate numbers of patients described by insurance status, race, stage, comorbidity, receipt of appropriate cancer therapy, and survival.

Conflicts of Interest: The contents do not represent the views of the U.S. Department of Veterans Affairs or the U.S. Government. The authors have no conflicts of interest to declare.