Hospital patient attitudes regarding cancer prevention policies focusing on processed meats: a survey of patients in high- and low-income areas

In 2015, the World Health Organization determined that processed meats cause colorectal cancer (1). These products include meats that have been transformed through salting, curing, fermentation, smoking, or other processes to enhance flavor or improve preservation. Common examples include sausage, hot dogs, bacon, turkey bacon, and ham, among others. Their consumption is also associated with stomach, pancreatic, prostate, and breast cancers (1,2)—presumably due to heterocyclic amines, polycyclic aromatic hydrocarbons, nitrites, and heme iron (3,4)—as well as cardiovascular disease and type 2 diabetes (5). Several studies have also linked processed meat consumption to chronic obstructive pulmonary disease (COPD) (6-8) and to increased hospital readmissions for COPD (9), presumably due to the tendency of nitrites and advanced glycation products found in meats to aggravate airway inflammation (10). In 2017, the American Medical Association called on hospitals to eliminate processed meats from menus for patients, staff, and visitors (11). This study aimed to understand patients’ attitudes about this policy shift. We present the following article in accordance with the Standards for Reporting Qualitative Research (SRQR) checklist (available at http://dx.doi.org/10.21037/jhmhp-20-19).

This in-person survey occurred at the United Medical Center and the George Washington University Hospital in Washington, DC. The former serves one of the city’s most economically disadvantaged wards; the latter serves one of its most economically advantaged wards. The study was conducted in accordance with the Declaration of Helsinki (as revised in 2013). The study was deemed exempt by the George Washington University Office of Human Research Institutional Review Board (NCR191502) and the Advarra Institutional Review Board (Pro00034052), and informed consent was taken from all participants.

Participants included hospitalized patients aged 18 years or above who were able to understand English and express meaningful answers. Patients in the intensive care or psychiatric units were not included.

Individual in-person interviews were conducted by medical students, a physician, and research staff. Each participant was asked to rate the importance of each of the following while in the hospital, choosing one of the following indictors of importance: “not needed at all”, “could take it or leave it”, “somewhat useful”, “important”, or “extremely important”: having Wi-Fi access, a landline telephone, being served healthful food each day, a quick discharge process upon leaving the hospital, having polite nursing staff, a private room, having flowers in the room, having access to pain medications, having pictures on the wall, having a doctor who speaks fluent English, having a daily bath, and being able to eat bacon or sausage. Only the responses related to processed meat were scored.

Participants were then read the following text: “Health authorities have found that bacon and sausage cause cancer of the colon (that is, the large intestine). If the hospital stopped serving bacon and sausage in order to help patients reduce cancer risk, would you agree or disagree with this policy?” They were asked to choose one of the following responses: “strongly agree”, “agree”, “neutral”, “disagree”, or “strongly disagree”.

Demographic data were summarized with descriptive statistics and compared between institutions using t-tests for age, Pearson chi-square for unordered categorical factors (sex, race, and ethnicity), and Mantel-Haenszel chi-square for ordered categories (expected duration of hospital stay). Exact p-values were reported when expected cell counts were small. Questionnaire responses were reported as frequencies, and distributions compared between hospitals, sexes, and black/African American versus white race groups, using the Wilcoxon rank sum test. We used the SRQR checklist when writing our report (12).

In all, 209 participants provided consent, 107 at UMC and 102 at GWUH. Very few patients refused, and the number of refusals was not recorded. As shown in Figure 1, 9 patients failed to complete the survey, leaving 100 completers at each hospital. The UMC population was 92% black/African American and 2% white; the GWUH population was 56% black/African American and 34% white (P<0.0001). Other races were represented in small numbers. Hispanics represented 2% of the UMC population and 11% of the GWUH population (P=0.0093) (Table 1).

Figure 1 Enrollment of the participants and completion of the survey. 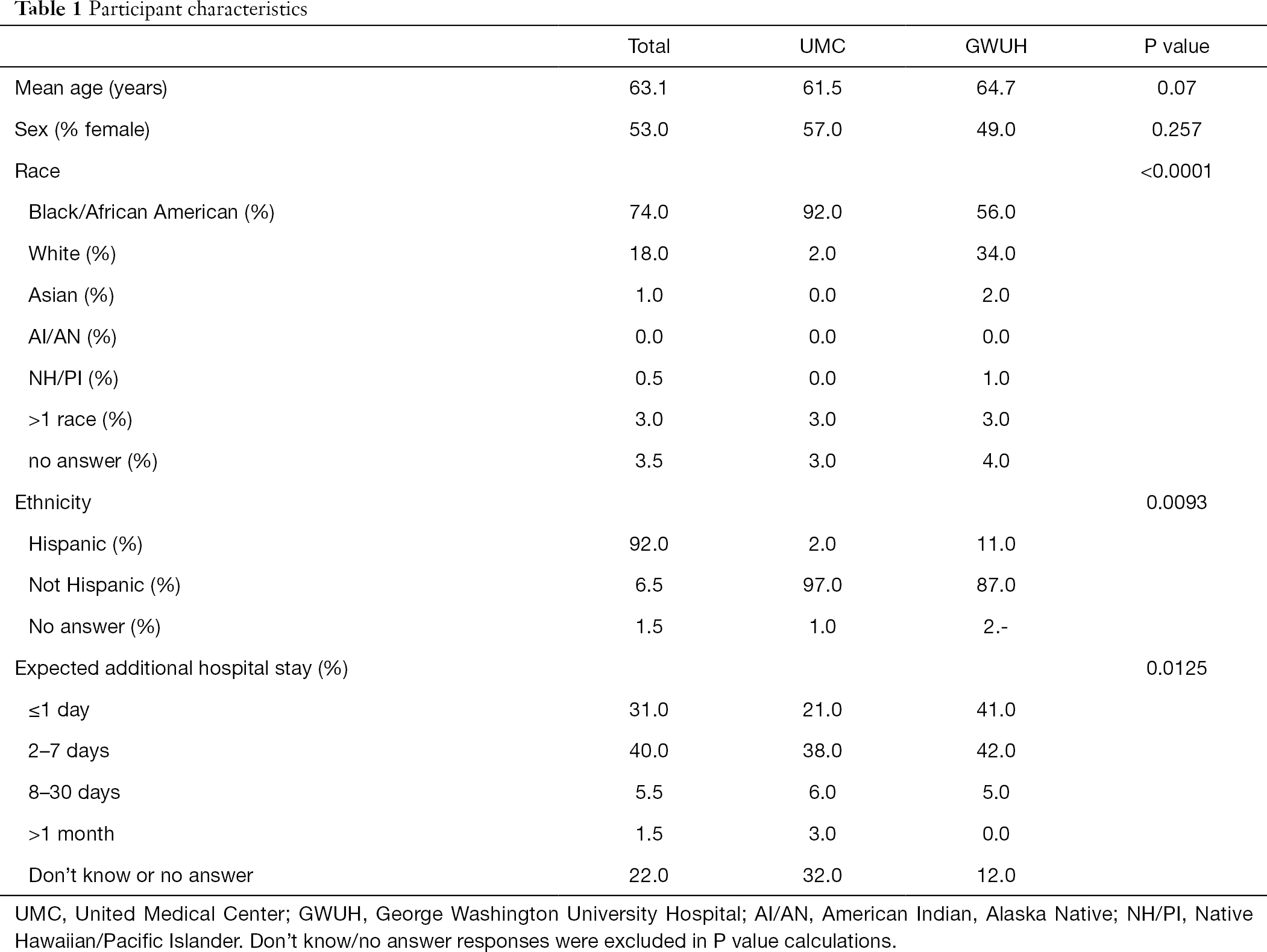 The importance of being able to eat bacon or sausage was rated as “not at all” or “could take it or leave it” or “somewhat useful” by 68.5% of participants. It was rated as “important” or “extremely important” by 31.5% (Table 2, Figure 2). 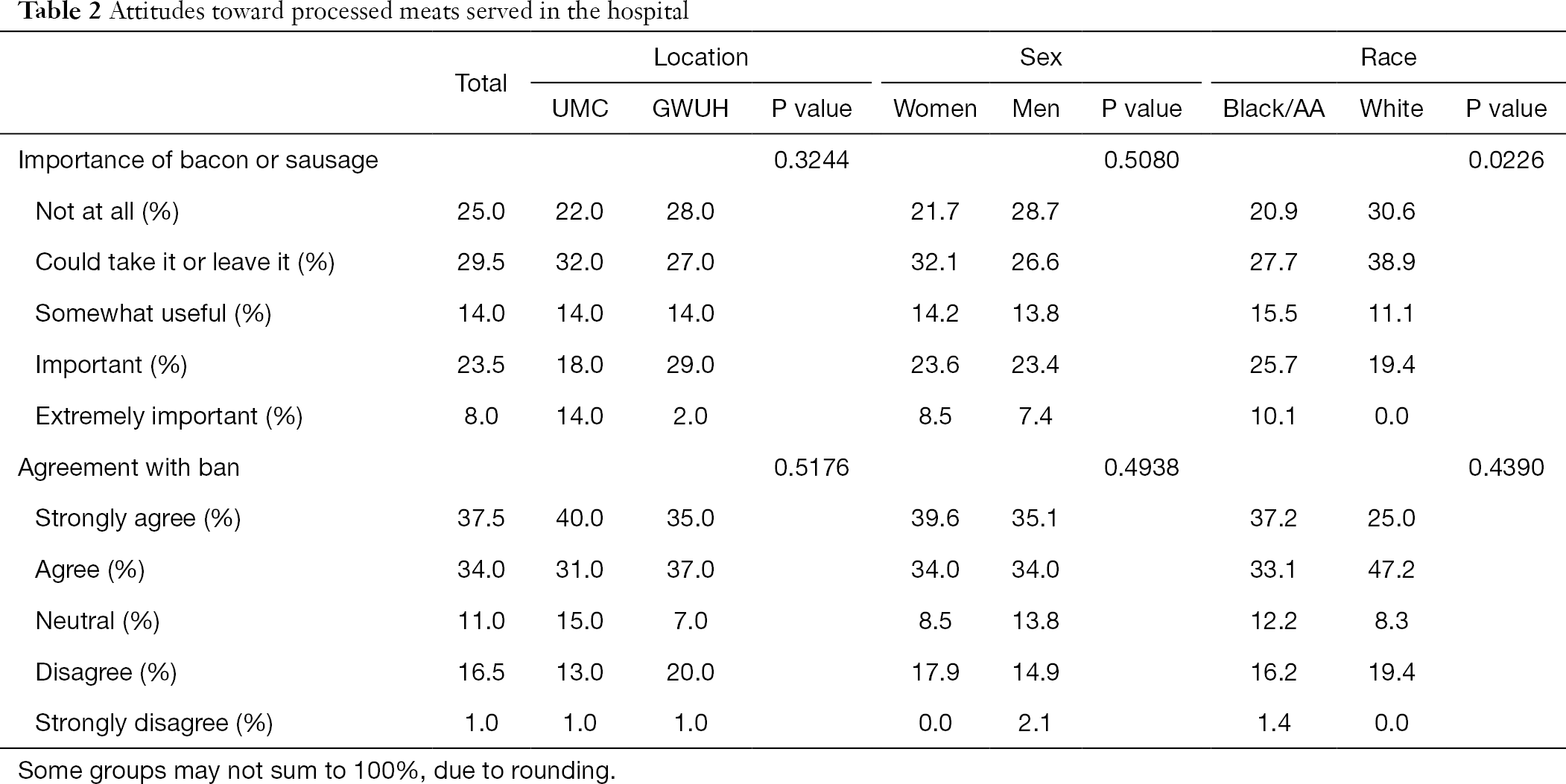 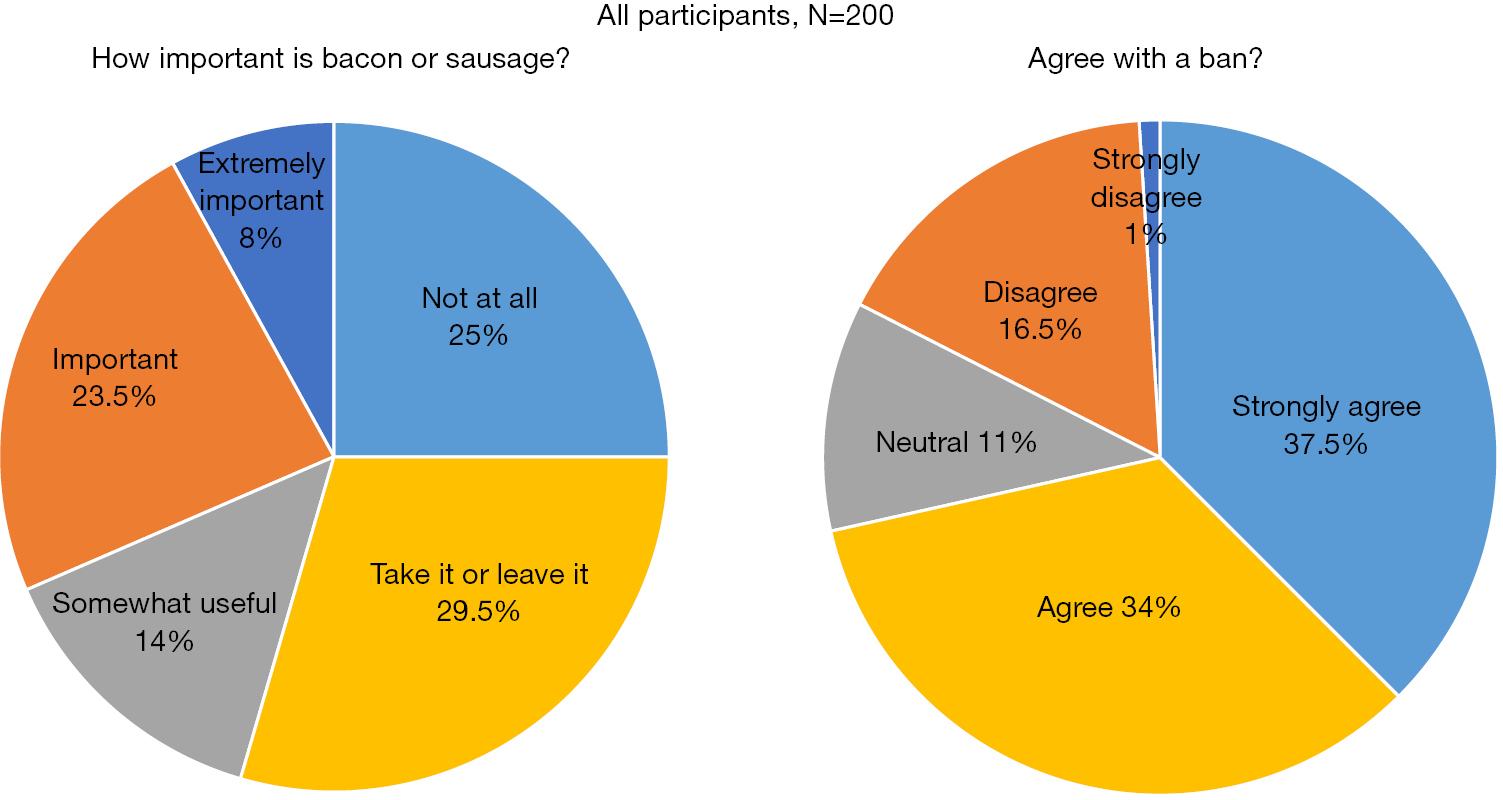 Figure 2 Responses to questions regarding (I) the importance of being able to eat bacon or sausage in the hospital and (II) agreement regarding the possibility of the hospital stopping serving bacon and sausage in order to help patients reduce cancer risk in 200 hospital inpatients.

Results at the two hospitals were similar. The importance of being able to eat these products was rated as “not at all” or “could take it or leave it” by 54% of UMC participants and 55% of GWUH participants, and as “important” or “extremely important” by 32% and 31% at UMC and GWUH, respectively. Similar numbers supported or were neutral regarding eliminating these products in the hospital (86% at UMC, 79% at GWUH).

There were no major differences by sex. Analysis by race showed that black/African American participants were more likely than white participants to describe bacon and sausage as important or extremely important (36% versus 19%, P=0.0226), but were also slightly more likely to support the exclusion of these products in order to help patients reduce cancer risk: 82% of black/African American participants and 80% of whites participants agreed, strongly agreed, or were neutral (P=n.s.). The numbers of individuals in other races were too small for meaningful comparisons.

Of the 63 participants who rated being able to eat bacon or sausage as “important” (n=47) or “extremely important” (n=16), 59% either agreed, strongly agreed, or were neutral regarding eliminating these products. The remainder disagreed, except for one participant who strongly disagreed.

In this survey of hospital inpatients, the majority considered being able to eat bacon or sausage in the hospital to be less than important, while 31.5% described it as important or extremely important. When presented with the possibility of the hospital stopping serving bacon and sausage to help patients reduce cancer risk, 82.5% supported or were neutral regarding excluding these products from the hospital menus.

In the present survey, however, at both hospitals, most patients viewed these products as unimportant, and a large majority supported no longer serving them in order to reduce cancer risk.

Surveys have shown that reasons for continuing meat consumption include concerns about taste and nutritional adequacy, a lack of awareness of nonmeat options, and limited cooking skills (20,21). While health issues play a role in consumers’ decisions regarding processed meat (22); many believe that risks come only from excessive consumption (23). The present study suggests that these attitudes are not immutable. Of participants who rated being able to eat bacon or sausage in the hospital as important or extremely important, more than half supported or were neutral regarding a policy excluding these products.

Strengths of the study include an adequate sample size, economically distinct populations, and strong face validity of survey questions. Limitations include the absence of residential patients and the absence of any educational component.

In conclusion, a majority of inpatients in hospitals serving two economically different areas of Washington, DC, supported (71.5%) or were neutral (11%) regarding excluding process meats from hospital menus for cancer prevention, with no major differences between the hospitals.

Reporting Checklist: The authors have completed the SRQR checklist. Available at http://dx.doi.org/10.21037/jhmhp-20-19

Ethical Statement: The authors are accountable for all aspects of the work in ensuring that questions related to the accuracy or integrity of any part of the work are appropriately investigated and resolved. The study was conducted in accordance with the Declaration of Helsinki (as revised in 2013). The study was deemed exempt by the George Washington University Office of Human Research Institutional Review Board (NCR191502) and the Advarra Institutional Review Board (Pro00034052), and informed consent was taken from all participants.